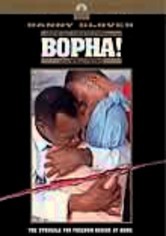 1993 PG-13 1h 58m DVD
A black South African family struggles to stay together as the father (Danny Glover), a senior police official, and the son, a student activist, clash amidst the upheaval of apartheid. But the ever-increasing violence soon forces the father to make a choice between his closely held beliefs and his son's life. Based on the play by Percy Mtwa, the movie marks Morgan Freeman's directorial debut and also stars Malcolm McDowall and Alfre Woodard.