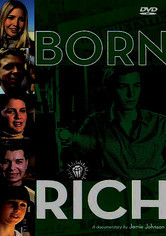 2003 NR 1h 15m DVD
The heir to the Johnson & Johnson pharmaceutical empire, Jamie Johnson, points his documentary lens in the direction of some privileged children who stand to inherit millions in the not-so-distant future. Johnson manages to pry revelations from heirs with some famous last names -- Trump, Bloomberg and Vanderbilt, to name a few. They speak frankly about money, family pressure and their often extravagant lifestyles.