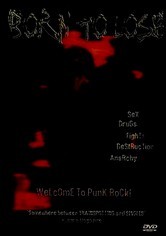 1999 NR 1h 20m DVD
The Spoilers, the fictional punk band in Born to Lose, defy all authority and rock out to their fullest on dingy stages every night. Led by drunken, drugged, masochistic singer Stevie Monroe, the Spoilers don't appear likely to pop their heads above the underground. This tale of debauchery within a fringe scene of the rock world is the directing debut of Doug Cawker, who formerly assisted editors on numerous independent films.