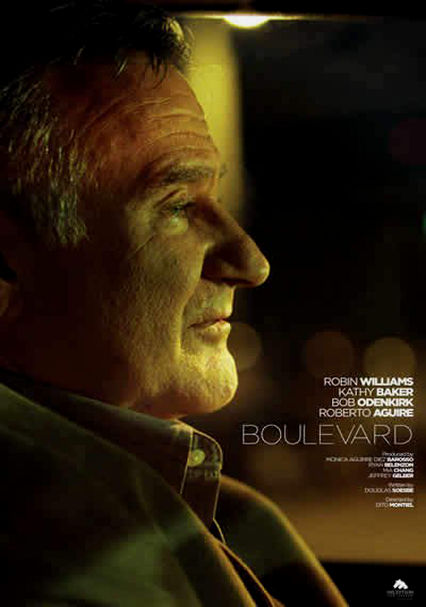 Parents need to know that Boulevard -- a drama about a closeted gay man -- features Robin Williams' final live-action performance. Though it's a coming-out story, the character goes through some very dark experiences, making it appropriate only for older teens and adults. Things get violent when an angry pimp beats up two characters, inflicting a bloody nose and a black eye; there's also some additional arguing, threatening, and brief violence. Language is sporadic but strong, with heavy uses of "f--k" and "f----t," as well as other terms. No sex is shown, but male prostitution is part of the story, and the main prostitute undresses, showing his bottom and the vague hint of his genitals. A character is said to have taken a drug overdose, and there's some social drinking and occasional cigarette smoking.

A character picks up a prostitute; his naked bottom is shown (also the vague hint of his genitals). Brief discussion of oral sex. Images of prostitutes on the street. The prostitute is shown with another customer in his room.

A man punches, slaps, and kicks two people; this results in a bloody nose for one and a black eye for the other. Angry threats. Cops violently arrest a man. A character in the hospital is said to have had a heart attack.

Shows the value of standing up for yourself, making painful-but-necessary life changes, and finding your self-respect. The main character makes some painful mistakes but eventually learns from them.

A secondary character is said to have taken a drug overdose. Some cigarette smoking. Wine at dinner.