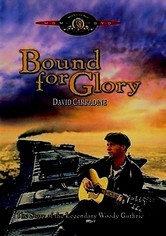 1976 PG 2h 26m DVD
Frustrated sign painter Woodie Guthrie (David Carradine) leaves his family in Depression-era Texas and heads to California. Work is scarce and hope is even harder to find. But a socially conscious radio performer (Ronny Cox) helps Guthrie bring his music to the masses and inspire generations of Americans. Based on the folk singer's autobiography, the film earned Academy Awards for its lush cinematography and faithful score.

Parents need to know that this dramatization of hardship and poverty in the 1930s includes several scenes of violence -- mostly fistfights and beatings of pro-union activists by company thugs. One minor character is shot, perhaps fatally. Though nothing explicit is shown, it's clear that Woody Guthrie has slept with various women, not just his wife. The political angle of the film is very pro-union, with bullying characters equated with corporations (railroads and agricultural, mainly) who exploit and underpay poor workers.

Nothing explicit, but Woody has clearly been intimate with other women besides his left-behind wife.

Paid thugs and bullies attack Woody Guthrie and his cohorts in the unionizing movement. Fistfights break out among hobo types in a railroad boxcar and men in a saloon. A train-hopper is shot from a distance.

Theme of unselfishly putting one's own personal gain aside to help the downtrodden. Along with that is the unjust exploitation of the poor and desperate in the 1930s that pointed out a need to unionize. An undertone that rich people -- even rich people who want to help -- live in a completely different reality than the working poor.