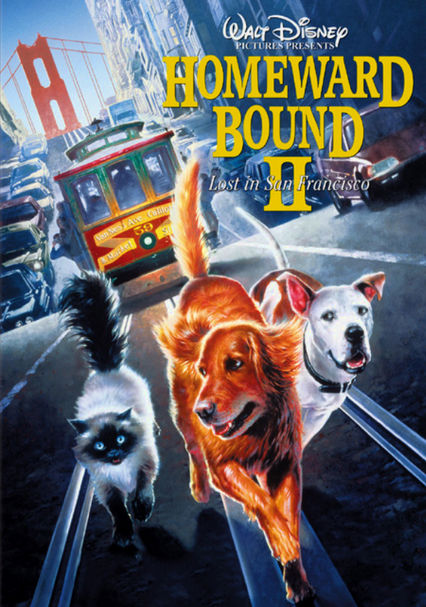 1996 G 1h 29m DVD
Canines Chance and Shadow, along with pussycat Sassy, get separated from the Seaver family in the airport and head off to San Francisco. After surviving the streets with the help of a tough gang of strays, they set out to reunite with their family.

Parents need to know that while there's no real violence, there's enough mild peril to frighten sensitive children. For instance, Shadow, Sassy, and Chance almost get hit as a plane takes off and Jamie thinks Chance has been hit and killed by a semi. There are also several dog fights or scenes where dogs bare their teeth menacingly. The villains steal dogs to sell for experiments, and one of them smokes a cigar the whole time.

Some comic violence, including Jack hitting his head on his van, dogs fighting with each other, and Sassy dropping a flowerpot on a dog's head.

Jack and Ralph steal dogs to sell to labs that do experiments on them. Jack starts a fire when he throws his cigar onto some dry grass. Chance endangers the whole group when he runs off from the rest.

Jack smokes a cigar all the time.