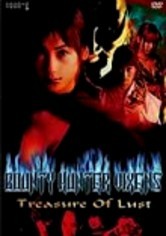 2006 NR 1h 13m DVD
When the beautiful vigilante Rio (Mai Yanbara) infiltrates a lawless village to claim a bounty, she finds herself the target of a dark conspiracy. With the help of a fiery sorceress named Fury (Moe Nishimura) and a black magic practitioner named Lotus (Misaki Mori), Rio looks to defeat her enemies and thwart their evil plan.