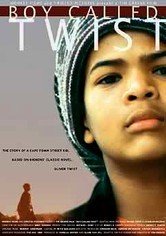 2004 NR 1h 55m DVD
This contemporary spin on the immortal novel Oliver Twist follows an orphan named Twist (Jarrid Geduld) who survives on the streets of Cape Town, South Africa, by taking up with a band of young thieves. But Twist is soon caught picking the pocket of affluent Ebrahim Bassedien (Bill Curry), who -- instead of filing charges -- finds kinship with the boy and takes him in. Meanwhile, his criminal cohorts conspire to bring him back into the fold.