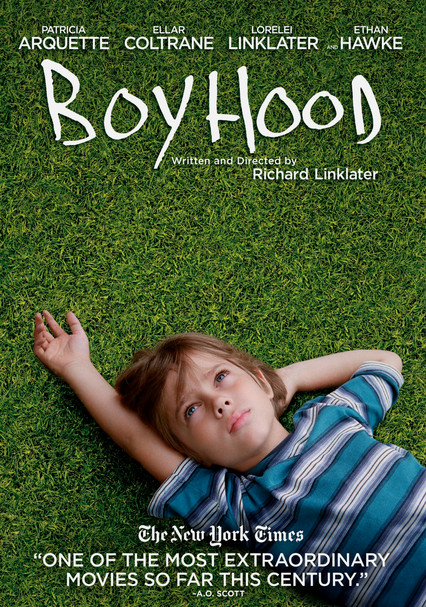 2014 R 2h 44m Blu-ray / DVD
After divorcing, a mother and father continue to share the task of guiding their young son through youth and adolescence, and finally to adulthood. As the years roll by, the relationships among the three characters continue to evolve as well.

Parents need to know that Boyhood is an extraordinary drama that was filmed over the course of 12 years, following the main character, Mason (Ellar Coltrane), as he grows from age 5 to age 18. Rather than sticking to a standard coming-of-age plot, the movie is more about the rhythms of life itself: trying to get by, making mistakes and moving on. There's strong language that comes in bursts, including "f--k" and "s--t." One sequence involves an abusive, alcoholic second husband. No onscreen violence is shown, but it's definitely suggested, and there's a sense of threat. Sex talk comes up from time to time, and the main character is seen briefly kissing his girlfriend. Teen characters also experiment with drugs and alcohol. Despite the mature content, this is a special movie that, if teens and parents watch together, could spark many fascinating discussions about life.

The mother marries a man who turns out to be a violent drunk. There's a suggestion that he beats her; she's shown lying on the floor of the garage, sobbing. He's shown as being angry and threatening, with the children and the mother very clearly afraid of him. Mason receives a shotgun as a present. Characters argue.

No hard-and-fast lessons, but characters do learn from simply getting through life's hardships and disappointments. The mother gives some advice to a man early in the film, and years later runs into him to find that her advice has paid off; she receives his heartfelt thanks.

Various brands are seen in passing over the years: computers (a desktop Apple), and video games (a Game Boy) are shown. Characters play a first-person shooter game on XBox. In one sequence, kids get dressed up to go to the bookstore to get the latest Harry Potter book. Coca-Cola is mentioned. Facebook is mentioned. Gatorade is mentioned/shown.

A secondary character is a dangerous alcoholic; at first he drinks secretly and later openly at the dinner table. He gets angry and abusive and is very clearly a threat to his wife and their kids. As a teen, Mason tries some beer while hanging out with some guy friends. He's later seen smoking pot. Still later, he attends a party with that has Jell-o shots and lots of beer, as well as drinking games. At college, he tries drugs with his roommate. Adults are seen drinking beer and other alcohol socially. The father smokes cigarettes from time to time and tries to quit at one point.