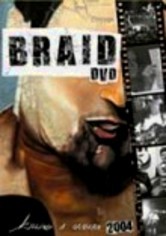 2001 NR 3h 4m DVD
Following the acknowledgement that they planned to disband after five successful years of touring, recording and performing, emo-punkers Braid offered their fans consolation in the form of five farewell shows in Milwaukee, Chicago and Champaign, Ill. In addition to the compilation of scorching concert footage, this in-depth retrospective includes a history of the group and interviews with the band members.