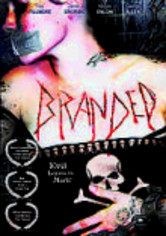 2005 UR 1h 25m DVD
Everybody knows that sex, drugs and rock 'n' roll go together, but when murder becomes part of the mix, it gets a little complicated. Rocker Mitch Steiger is being led down a slippery slope of murder and mayhem in this bloody horror film festival favorite. With death clinging to him like the plague, Steiger must fight to retain his sanity. Darla Enlow directs Trey Fillmore, Jamie Sworski, Megan Enlow and George Allen.