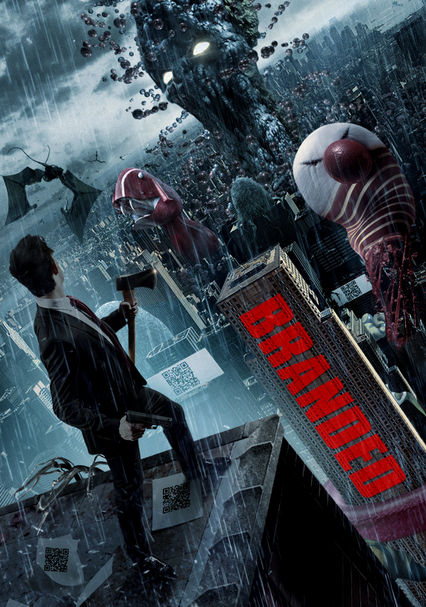 2012 R 1h 46m Blu-ray / DVD
What if your favorite burger joint, clothing store and cell phone maker were more than just brands, but all part of a vast thought-control conspiracy? When Misha and Abby uncover the truth, it makes them targets of a mind-bending global monstrosity.

Parents need to know that Branded is a bizarre, futuristic satire on marketing and advertising set in Russia. It will definitely get older teens thinking about the effects of marketing and advertising and how people can be made to believe that they "need" certain products. But at the same time, it's strange, humorless, and unpleasant, with some violent events (such as beatings) and lots of blood in certain scenes (including a cow being sacrificed off screen). Strange, unsettling monsters litter the skyline and battle each other during the movie's final third. Characters have sex on more than one occasion, but the only nudity is the male lead's backside in a non-sexual scene. Language includes several uses of "f--k" and "s--t," and characters drink and get drunk in a few scenes. Fake products are used in the satire, but they sometimes resemble real products, and real products are also occasionally mentioned and/or shown.

The two main characters fall in love and have sex in a car during a traffic jam. They kiss, but no nudity is shown. There's another brief kissing/foreplay scene later on. The main character takes off his clothes during the cow sacrifice scene; he's shown from behind. Two women strip to their underwear on a hot day while stuck in traffic. A TV ad talks about "impotence."

The main character is punched, beaten up, and bashed in the head with a club. A fair amount of blood is shown. A cow is sacrificed; it takes place off screen, but there's lots of blood as a result. Bizarre, frightening creatures are shown flying around the skyline; they eventually begin battling each other, with attacks and some blood. Characters make trailers for horror movies, with images of a girl screaming and getting dunked in a tank of water. In a flashback, a man is burned alive in a kiosk (no specifics shown).

Language isn't very frequent but includes multiple uses of "f--k" (mainly from one character). "S--t" is also used a few times, in addition to "Christ" and "God" (as exclamations).

The movie is a satire on marketing and advertising, and as such it has plenty to say about the way that people can be manipulated into believing that they "need" certain kinds of products. The movie's good guys try to stand up to these forces, while the bad guys try to find newer and more devious ways to perpetuate them.

The movie is about advertising and consumerism, but it's a satire and isn't actually promoting any real products. There are lots of fake ads and parody names like "Ooogle," "Yapple," "Vipsache," "Soda Soda," and "The Burger." Some of these deliberately look like real brands, however, and occasionally real names like "Coke," "Pepsi," "Adidas," and "Marlboro" are mentioned and/or shown in the context of the satire.

The female lead smokes a cigarette in one scene. Adult characters are shown drinking (either beer or vodka) and getting drunk on at least three separate occasions.