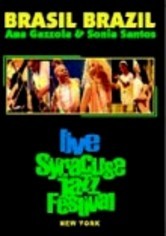 2003 NR 1h 0m DVD
Ana Gazzola and Sonia Santos created Brasil Brazil to bring the infectious sounds of Carnival to audiences worldwide. Backed by a band of talented young musicians, the two raise the roof in this show from New York's 2002 Syracuse Jazz Festival. More than just a concert, Brasil Brazil is an immersive stage show that brings people to their feet with its upbeat blend of Brazilian music and style. Performances include "Oxam" and "Casa Forte."