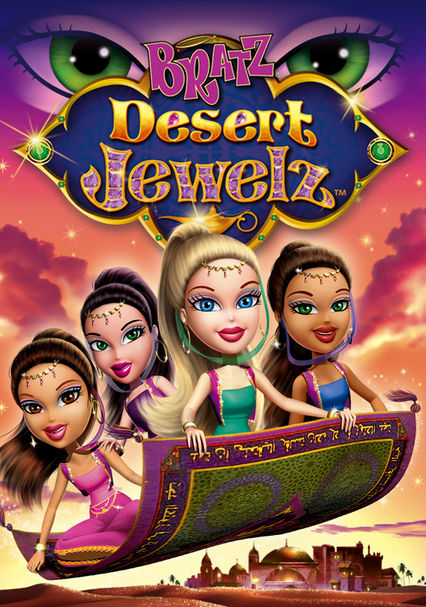 2011 NR 1h 14m DVD
When some bandits crash a fashion show and nab a ring with fantastical powers, the Bratz girls hop a magic carpet in hot pursuit. Along the way, they welcome a brand-new friend to their crew and join in the search for an enchanted lamp.

Parents need to know that the Bratz dolls are particularly controversial for being overly sexualized and superficial, but in Desert Jewelz, they're less fashion- and looks-obsessed than in the franchise's other direct-to-DVD movies. There's considerable peril, especially when one character is kidnapped by a creepy professor and in a frightening scene when it seems like a beloved camel has fallen to its death. The language is tame except for a few mild insults and the innuendo implied in the professor's treatment of his captives. Some parents won't appreciate that the girls wear midriff-baring belly dancer costumes in a fashion show, and those who pay attention to the accents may find them caricatures of cultural stereotypes.

One of the girls makes an off-hand remark that they'll be "forced to join a harem" if they cant get out of harm's way. There's a super creepy vibe between Professor and Katia, whom he repeatedly calls "pure one" (which we assume means "pure of heart," but the way he leers at her evokes a different connotation that parents will pick up on). The girls do wear tight-fitting styles, lots of make-up, and midriff-baring genie outfits in a fashion show (where they sashay down the aisle). On the bright side, there aren't any guys their age for them to flirt with, so this is a tamer movie than some of the others in the Bratz franchise.

Katia is kidnapped by a nefarious professor, and her friends are stranded in a cave until they figure out how to escape. Kids may be initially scared of the hideous hag with the warts and crooked teeth, but she's actually helpful. There's definite peril in a few scenes, especially when it seems like a beloved camel has fallen over a cliff or that a father is trapped as a genie forever. Since Katia is kidnapped for the majority of the film, the sequences featuring her and her captor are especially tense.

Despite their reputation for being superficial, skimpily dressed dolls, the Bratz friends do come together to help their friend Katia, who, in turn, is willing to make sacrifices to save her father. Friendship and family are the major themes of the movie.

Like any movie based on a popular toy line, the DVD is a powerful avenue to market the Bratz dolls to young girls. There are special Genie editions of all the dolls, as well as a dedicated website with bios and photos of all the available Bratz products.