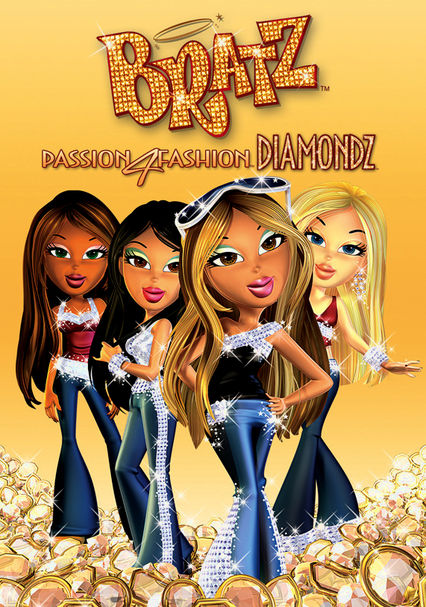 2006 NR 1h 10m DVD
The Bratz girls climb aboard a truck with its own catwalk, ready to recruit teenage fashion designers to model clothes in a fashion show. But when they stumble across a haunted town and pick up an ambitious diva, their caravan veers off course.

Parents need to know that the trademark Bratz girls' obsession with looks, clothes, and makeup is alive and well in Passion 4 Fashion Diamondz. They pose, they strut, they "ooohhh" and "aaahhh" over diamond boots, frosted hair, and ruby red pouty lips. The characters are designed with doe-eyes, breasts, thin but curvy bodies, large heads, and have decidedly sexualized ways of walking and moving. The short film is a part of vast franchise directed at young girls and tweens, cross-promoting dolls, toys, accessories, and programming. Mild suspense in this movie comes from a ghost-cowboy, highway mishaps, and getting out of harm's way when a subway train bears down upon them.

No overt sexuality, however the Bratz characters are designed to accentuate their feminine attributes: legs, breasts, hair, and facial features. They wear lots of skimpy clothing and frequently strike poses, walk and move seductively. They can be counted upon to pout, flutter their eyelashes, and entice those from whom they want something.

Some eerie music and mild suspense run through the film as the ghost of a masked cowboy appears to stalk the girls. Two vans on a road trip across the country have mishaps; flat tire, faulty brakes send them careening off the road. A climactic final sequence finds two of the Bratz trapped in a subway tunnel with a train getting closer. Surprising confrontations with a space ship and aliens, with flying cows, and with an ambitious contestant who will stop at nothing to win.

While most of the film promotes superficial values such as looking good, dressing well, being popular, and "makeovers," there are a few positive messages thrown into the mix: It's desirable to take risks and express oneself; each person has his or her own style; and "everyone has a special something -- it's just a matter of bringing it out." And, the characters who cheat and sabotage others to get ahead do learn the error of their ways. A few cautionary messages, too: Don't pick up hitchhikers; don't talk to strangers; don't take rides from strangers.

Bratz is a trademark for heavily promoted and cross-promoted games, dolls, toys, TV/movies, and products.