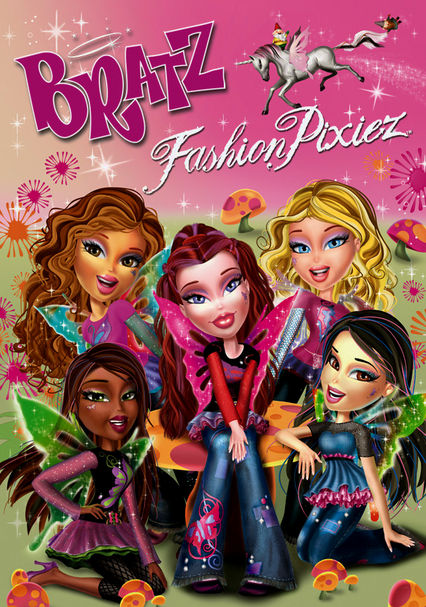 2007 NR 1h 12m DVD
Trying to understand Cymbeline's odd behavior, Yasmin and Cloe use special glasses to enter an amazing world. As the Bratz help the fairies, gnomes and unicorns of this special land, they discover that true friends are loyal through thick and thin.

Parents need to know that Bratz: Fashion Pixiez is a very dark entry in the Bratz DVD franchise with a threatening villain who uses black magic and sexuality to lure the young Bratz girls and their friends into a sinister world where danger awaits. People appear, disappear, and are transported against their will. Mysterious events and mild-altering eyeglasses turn some of the Bratz kids into mean, self-centered, and self-destructive pixies. In one scene, two little girls watch in terror as their mother guides them to safety and then is taken from them, maybe forever, by a frightening storm.

Lots of teasing and flirtatiousness, with the villainous Lina overtly trying to seduce and lure a Bratz boy into the forest. The Bratz characters all have well-developed, curvy bodies, breasts, and often wear very short skirts and midriff tops.

Creepy pixie creatures from a "netherworld" inhabit much of this movie. Called "dark pixies," they surround the world in which the Bratz live, unseen but able to cast spells, fight against the "good pixies," and create havoc whenever possible. Scenes are bathed in darkness, with spooky music, cackling ravens, malevolent fairy-like beings, highlighted by an evil girl with magical powers who wishes to rule the pixie kingdom. There are fires, chases, characters are spirited into the unknown, an avalanche traps the Bratz girls, a mother vanishes as her two terrified little girls watch. A leading character appears to be dead through a long scene. Psychedelic lights and falling objects make some scenes additionally scary.

The explicit message is that friends are supposed to stick together no matter what, but the more subtle messages involve how girls are supposed to look and act -- sexy, made-up, pretty, cool -- which gives young girls a very skewed perspective of gender.

Bratz films are part of an extensive franchise of dolls, accessories, and games.

One subtle reference to drugs: when a boy acts strangely, one of the girls asks him whether or not he got into the science teacher's chemistry supplies.