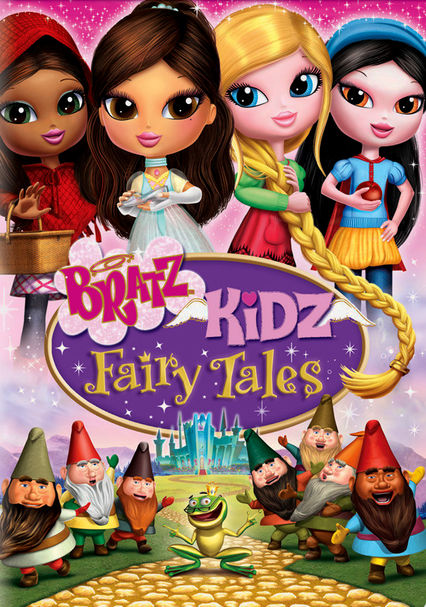 2007 NR 1h 14m DVD
The Bratz get more than they bargained for when they claim that fairy tale heroines are weak -- and then find themselves transported to Fairy Tale Land, where they face the same challenges as Snow White, Cinderella, Rapunzel and Red Riding Hood.

Parents need to know that Bratz Kids: Fairy Tales is intended for younger kids and doesn't focus on the typical tween Bratz interests of fashion and makeup, etc. The focus on traditional fairy tales means that there are some mild scares from a cackling witch, hungry wolf, and jealous evil queen. Beneath the frequent cartoon action, a oft-stated message encourages the Kidz to withhold judgment of others until they fully understand their predicaments. Don't be surprised if kids who watch ask for Bratz merchandise, since this feature is essentially a giant commercial for the toy franchise.

Some exaggerated cartoon fairy-tale danger from a witch, an evil queen, a large black bird, and a wolf. Amidst the cackling, howling, teeth-bearing, and chasing, the girls repeatedly escape from danger: they fall, dangle over a boiling pot of stew, land in the clutches of a hungry wolf, climb to great heights. The witch careens through the air on her broomstick, her magic wand shooting sparks in the Kidz direction; the evil queen prepares her poisoned fruit; the wolf threatens to eat them over and over again. Several villains fall into a very deep well, and at least one is a meal for the wolf.

Suggests that it's unwise to judge others too quickly. Encourages keeping fairy tales alive for children.

The movie is a key marketing tool in the vast Bratz franchise.