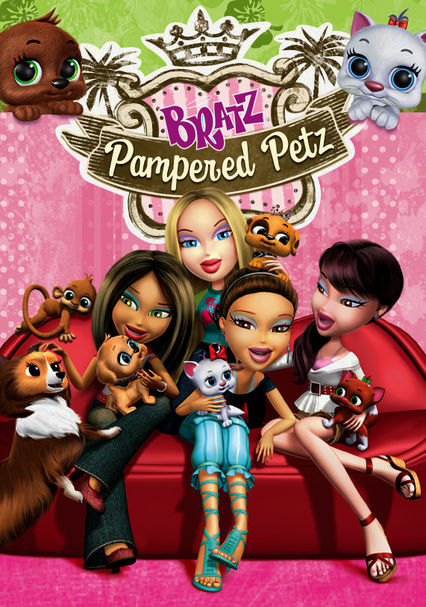 2010 NR 1h 10m DVD
When their friend Lola learns that she and all of her rescued pets are about to be evicted, the stylish Bratz girls rush to save the day by trying to organize an electrifying benefit concert and locate new homes for the cute and cuddly critters.

Parents need to know that Pampered Petz once again features Cloe, Yasmin, Jade, and Sasha -- four teens who are consumed by their looks, clothes, and makeup -- though in a rare departure from the usual silly plots, the girls are actually trying to help someone in this feature. The movie acts as a giant advertisement for Bratz toys and merchandise and this feature introduces adorable puppies, kittens, and a monkey, which are also for sale in stores. There's nothing scary here, though kids will be concerned for the fate of the homeless animals.

Animals are chased, captured, and caged by a comic villain and his henchman. Homeless animals are threatened with being put to sleep.

Set as always in the rarefied Bratz world of fashion, wealth, makeovers, and spa treatments, the Bratz girls commit themselves to a selfless neighbor who takes in homeless animals. The girls find satisfaction in helping Lola with the pets, in reuniting an estranged family, and in making a difference in their community.

Bratz films are marketing tools for the sale of dolls, merchandise, and games.