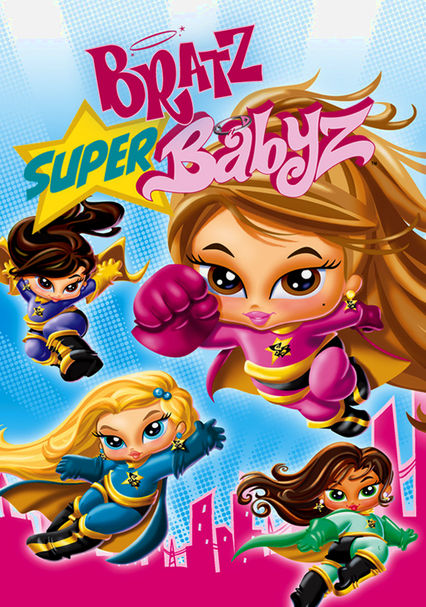 2007 NR 1h 14m DVD
When an alien matter-converter machine transforms four baby girls into superheroes, the quartet must learn to work together as a team to fend off the extraterrestrials who are looking for their powerful device.

Parents need to know that Bratz Super Babyz is intended for very young Bratz fans. There's none of the fashion-conscious, make-up-obsessed behavior usually associated with the franchise. Cloe, Yasmin, Sasha, and Jade are toddlers who are interested in toys, superheroes, and amusement park rides. The girls go on mildly suspenseful rescue operations and run into trouble from some comic space potatoes who chase them and fight using their exaggerated, entangling roots. It's doubtful that anyone but the youngest or most sensitive kids will find this movie scary. And it's doubtful that the usual tween audience will find it appealing.

Some mild cartoon action and suspense when the Super Babyz face off with a group of silly-looking Tubers (potatoes) from another planet. Tubers capture and bind the Babyz with tuber roots. Pudding is thrown. One potato points a laser gun at the Babyz. The captured Babyz are in danger of being transported to the Tubers' home planet. When the Babyz realize they have super powers they save a school bus that is in danger of going off a cliff and rescue a family from a bear. In other brief action sequences, Cloe is frightened on an amusement park ride and a store clerk is tied up by the Tubers.

Working together as a team gets the job done.