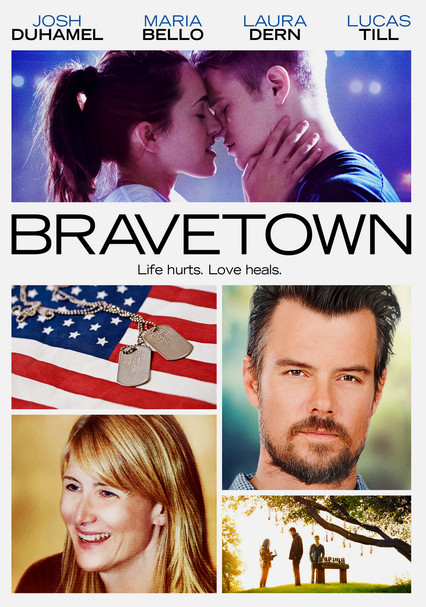 Parents to know that Bravetown is a fish-out-of-water drama about a young New York City DJ who's court-ordered to move to small-town North Dakota after getting caught with drugs. A bit reminiscent of both Footloose and Step Up, the movie includes underage sexuality, substance use (cigarettes, pot, alcohol, and pills -- including an accidental overdose), and language (a few uses of "f--k" and "f--king"; same for "s--t," "a--hole," and "bulls--t"). The main sex scene happens early on (in a car, featuring a mostly clothed couple, though it's clear what's going on); the second half of the movie just has a couple of kisses. There's also a bit of violence, like when a small group of jocks beats up the main character, leaving him bloodied and bruised. The movie's themes get pretty serious -- war, post-war depression, parent-child reconnection, and grief -- and families sensitive to references to military deployments and war should note that both are major themes of the movie, since the town is best known for sending soldiers off to join the armed forces.

Brief sex scene early in the movie: The teen couple involved is mostly clothed, and they're in a car, but it's still obvious what's going on (she's moving up and down on top of him and nearly spilling out of her tank top). Also a couple of kisses.

A small group of jocks beats up Josh, who's bloodied and bruised. A teen who takes drugs ends up in the hospital.

Story is about redemption, forgiveness, and community. Josh learns the value of each when he moves from New York City to a small town in North Dakota.

Teens drink, take pills, and smoke cigarettes and pot. One ends up in the hospital after taking drugs.