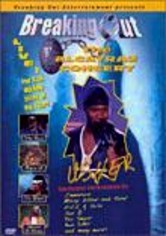 1998 NR 1h 47m DVD
Over three consecutive nights, R&B and hip-hop's most celebrated stars appear in a concert staged on the infamous prison island of Alcatraz, where they perform their most popular songs and deliver a gripping message to our nation's at-risk youth. Among the performers are the legendary Run-DMC, Too Short, K-CI & JoJo, Missy Elliot, Immature and Da Brat. Sports stars Shaquille O'Neal, Luc Robitaille and Robert Horry also appear.