Brett Favre: On and Off the Field 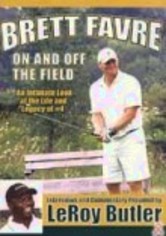 Brett Favre: On and Off the Field

2004 NR 1h 0m DVD
"The Pack is back!" Green Bay's favorite son, National Football League quarterback Brett Favre, is profiled on and off the field in this incisive documentary narrated by NFL player LeRoy Butler. Chock-full of interviews from players and friends, the film reveals what makes Green Bay Packer Favre tick during fourth and long yardage -- or when he's just kicking back after game time. It's #4 like you've never seen him before.