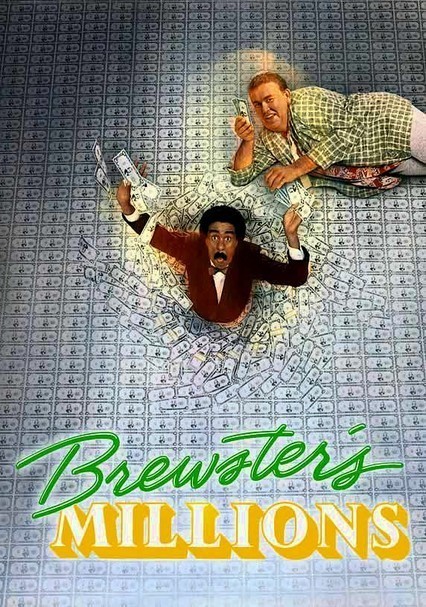 1985 PG 1h 42m DVD
Washed-up baseball player Montgomery Brewster (Richard Pryor) learns he's inherited a $300 million fortune from his deceased, rich uncle. To get the cash, however, Brewster must spend $30 million within 30 days -- and have absolutely nothing to show for it. Baseball buddy Spike Nolan (John Candy) helps Brewster with his spending spree while snooty attorney Warren Cox (Stephen Collins) watches his every move.

Parents need to know that this '80s-era comedy has a fair amount of swearing and drinking. The leading character is supposed to be a womanizer, though no sex is shown onscreen. Even though the plot doesn't exactly endorse greed, it does show Brewster being enormously popular when he has tons of money, a nobody when he doesn't. And he seems to be having more fun with the tons of money.

No action, just talk; Brewster is said to be a womanizer on the road, overnighting in motels with women. He starts putting the moves on a sexy stranger in his penthouse, but is interrupted. Pick-up lines talk about the health benefits of nude massage.

Punching in a barroom brawl and one-on-one against a bad guy.

Money changes everything -- not so much Brewster as those around him, who swarm and fawn when he's a spend-crazy rich guy and desert him when he isn't (since that's part of Brewster's whole plan anyway, this is not a very pointed lesson). Another minor theme is that poor people are nicer and more honest than snooty rich financeers.

Considering how the whole plot is about overspending and conspicuous consumerism, there is little product-placement or brand names (Perry Ellis menswear, basically).

Social drinking in bars, restaurants, and in private, including brandishing (and attempted theft of) a valuable bottle of wine. Talk of youthful tobacco-smoking (and the punishment for doing it).