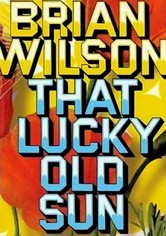 2008 NR 2h 30m DVD
Regarded by many as the heart, soul and mind of rock 'n' roll pioneers the Beach Boys, Grammy Award winner Brian Wilson is among the most revered figures in the history of popular American music. Packed with a compilation of recording session footage, exclusive interviews, a feature length documentary and a live performance, this release offers fans a behind-the-scenes peek at the creation of Wilson's 2008 album, "That Lucky Old Sun."