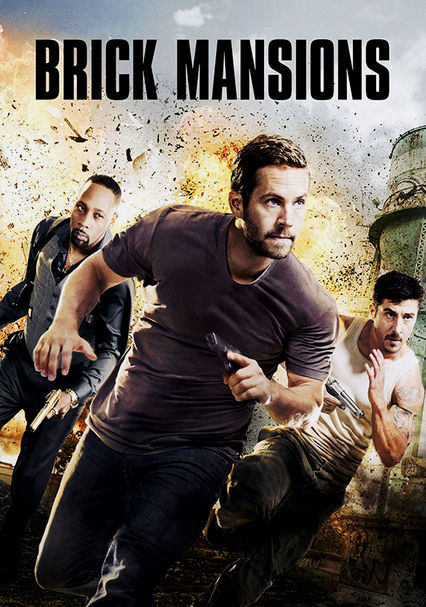 2014 PG-13 1h 31m Blu-ray / DVD
In this explosive thriller, Detroit undercover cop Damien Collier fights a constant battle to stem a tide of crime and corruption. As a ruthless drug lord makes apocalyptic plans for the city, Damien teams with an ex-con to foil the plot.

Parents need to know that Brick Mansions is an American remake of the 2004 French action film District B13; both films highlight the sport/discipline known as parkour (moving efficiently through an environment using your body). Violence includes plenty of fighting and shooting, though for the most part it feels cartoonishly over the top and is light on blood. But minor characters do die, and a female character is shown in situations of menace or peril. Women are also shown wearing sexy outfits, though there's no nudity. Language includes the occasional use of "s--t," the "N" word, and "a--hole." A supporting character is a drug dealer, and great quantities of drugs (either cocaine or heroin) are shown. There's also some minor drinking and smoking. Star Paul Walker died in a car crash before release, and the movie is dedicated to him.

The main female character wears a skimpy outfit, with a short skirt that flies up in a few brief shots (nothing sensitive is shown). Another character undoes two buttons on her blouse with a knife (again, nothing sensitive shown). One of the villains is a woman who wears a sexy leather outfit. The main character has an unidentified girl in his apartment, apparently waiting for him in bed. She wears a negligee.

Violence is very strong, but it's cartoonish and there's not too much blood. Lots of physical, parkour-style fighting, plus punching, kicking, and slamming; also a lot of shooting and car chases and crashes. Minor characters die. One character is stabbed. Two women have a brutal fight, and one is briefly whipped with a cat o' nine tails. Some violent news footage is shown, with fires and riots. A woman is punched in the face and is kidnapped and walked through a warehouse full of dangerous-looking, leering men who are making catcalls and sometimes reaching out for her (it has a feel of sexual menace). A Taser and a grenade are used. A nuclear device is shown but not detonated.

In a broad way, the movie speaks out against political powers and the idea of the wealthiest citizens siding against the poorest, separating them and treating them with a lack of respect or humanity. It also shows two different characters learning to work together.

One of the supporting characters is a drug dealer. Another main character is shown opening several packages of cocaine (or heroin) and dumping it down a bathtub drain. A bad guy visits an underground drug lab, with several masked women working on making and packaging drugs. During a fight, one character throws a handful of the white powder at one of his opponents. The main character drinks a glass of whisky in one scene. Some politicians have a champagne toast. An older character is shown smoking cigarettes; there's talk of him quitting.