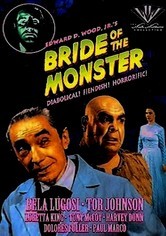 1955 NR 1h 9m DVD
Horror icon Bela Lugosi (Dracula) appears in his last starring role as Dr. Eric Vornoff, who with his crazed man-beast servant is conducting flesh-burning radiation experiments in an attempt to create a legion of atomic supermen. When a newspaperwoman gets too inquisitive for her own good, Vornoff takes steps to protect his research. Produced and directed by cult filmmaker Ed Wood Jr., the film features many of his regular players.