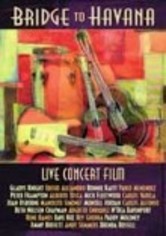 2004 NR 1h 0m DVD
In 1999, a group of American and British rock artists -- including Bonnie Raitt, Mick Fleetwood and Gladys Knight -- journeyed to Havana, Cuba, where they collaborated with renowned local musicians to write, record and perform a series of new songs. This program showcases many of these spirited tunes performed in the studio and in concert, featuring Peter Frampton, Joan Osborne, Edesio Alejandro, Gerardo Alfonso and others.