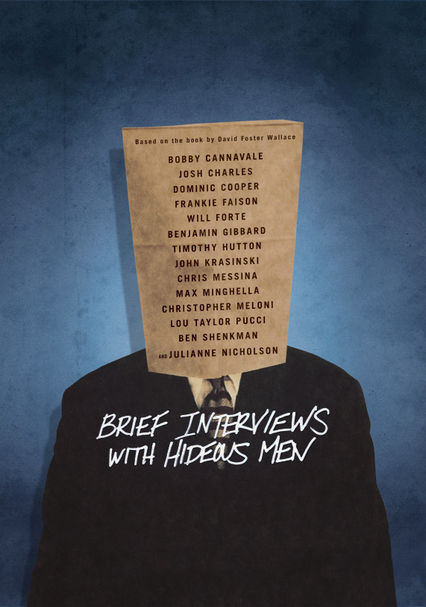 2009 NR 1h 20m Blu-ray / DVD
Grad student Sara Quinn (Julianne Nicholson) is perplexed by her endless string of romantic failures. Combining work on an anthropological dissertation with her quest for personal answers, Sara interviews an array of men, whose confessions range from banal to bizarre. Actor John Krasinski makes his directorial debut with this quirky comedy based on a collection of short stories by David Foster Wallace.

Parents need to know that this indie relationship drama directed by The Office star John Krasinski based on the story collection Brief Interviews with Hideous Men by David Foster Wallace is aimed at adults. The subject matter can feel very heavy, and the characters who deliver the movie's intense monologues/conversations about the coolly detached -- and sometimes destructive -- ways that men interact with women are are deeply flawed. Expect some swearing (including words like "f--k"), sexual references, social drinking, and smoking.

Men and women aren't shown actually hooking up, but some scenes depict men ogling women or picking them up. A couple is shown cuddling.

Though no one is physically hurt, some of the stories the men tell are demeaning of women. And in some, there's an undercurrent of hostility.

The movie presents a multifaceted, complex portrait of modern relationships -- there's no simple take-away here. Women don't have it easy, but neither do men.

Some social drinking and smoking by adult characters.