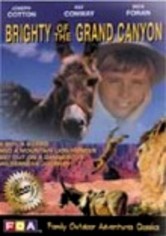 1967 NR 1h 29m DVD
At the turn of the century in the Southwest, Brighty the wild burro accompanies his friend, a prospector named Old Timer, on a hunt for gold. A claim jumper robs the pair of their strike, killing Old Timer in the process. Brighty then sets out on a quest -- befriending a mountain lion hunter along the way -- to bring Old Timer's murderer to justice in this drama based on the best-seller by Marguerite Henry.