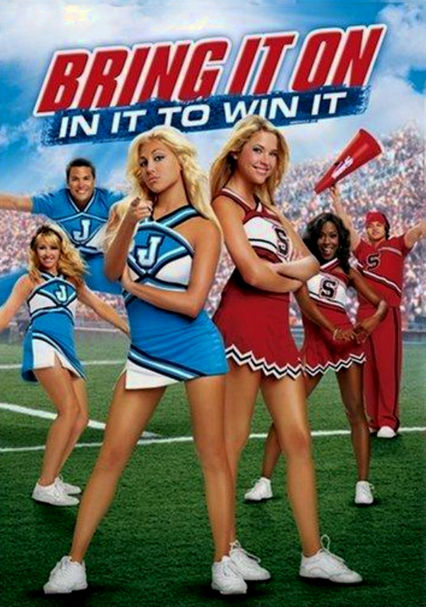 2007 PG-13 1h 30m DVD
Carson sets out to guide her squad to victory and to win the heart of rival cheerleader Penn at the Cheer Camp Nationals, taking on competitive Brooke in a one-on-one battle. It seems that Brooke wants not only the trophy but Penn's affections, too.

Parents need to know that although this fourth installment in the Bring It On franchise doesn't offer much in the way of actual sexual behavior, it has some heavy-handed sexual innuendo and some characters who are overtly sexual. There's also some cheer-related violence, including falls and broken bones. More problematically, most of the characters are stereotypes -- the "ghetto" African-American girl, the dumb blond, the effeminate male cheerleader, etc. Though these labels are disproven later in the film, viewers would be better served watching something that doesn't resort to stereotypes in the first place.

A lot of gratuitous bikini and butt shots of the girls. A lot of sexual innuendo (discussion of Carson's virginity, saying she could "take a little prick," etc.). Brooke kisses Penn to make Carson jealous. Carson and Penn kiss once.

A lot of cheer-related injuries, including teens falling and breaking limbs or hitting their heads (nothing graphic and no serious injuries). Scary dream sequences in which Michael threatens Carson with a chainsaw and Pepper drags Carson to hell. Sarah talks about disemboweling the competition, and Aisha says she's going to "slice" someone "like government cheese."

Infrequent use of words like "ass," "damn," and the Spanish "pendejo."

Social stereotypes run rampant through the first part of the film, including the "ghetto" African-American girl, the effeminate gay man, and the dumb blond. They're disproven later, but they're in full effect through most of the film. Penn lies to his father about where he's going and the teams lie, cheat, and steal in order to win.

The movie is practically a commercial for the Universal Orlando theme park in Florida -- it comes packaged with a promotion for the park, and the film features the park's Hollywood backlot and Jaws attraction. The film also features Boost Mobile, MySpace, the Hard Rock Hotel, and media personality Tara Connor.

Sarah says she's "a little high," but no one is shown doing drugs or drinking.