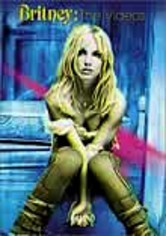 2001 NR 0h 30m DVD
This eclectic collection gathers three of pop music phenomenon Britney Spears's music videos -- "Don't Let Me Be the Last to Know," "I'm a Slave 4 U" and "I'm Not a Girl, Not Yet a Woman" -- plus "Overprotected," which showcases her first foray into show business, and two of her commercials for Pepsi. Topping the compendium is footage from Spears's smashing 2001 MTV Music Video Awards performance of "I'm a Slave 4 U."