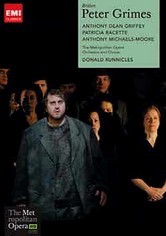 2008 NR 1h 58m DVD
Director John Doyle steers this arresting Metropolitan Opera production of Benjamin Britten's "Peter Grimes," the haunting tale of a man under suspicion for a crime he swears he did not commit -- the murder of his apprentice. American tenor Anthony Dean Griffey sings the title role of Peter Grimes, with American soprano Patricia Racette supporting as widow Ellen Orford, the devoted woman who stands by his side.