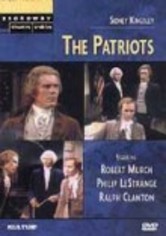 1976 NR 2h 0m DVD
This absorbing 1976 production of dramatist Sidney Kingsley's historical play centers on the formative days of the United States and the disputes between founding fathers Thomas Jefferson (Robert Murch) and Alexander Hamilton (Philip LeStrange). Although the two men greatly respect each other, the deep-seated clash in their ideologies engenders conflict just as the fledgling country is beginning to take root.