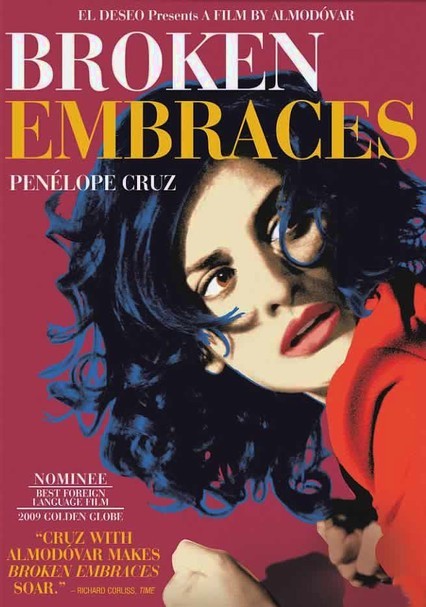 2009 R 2h 7m Blu-ray / DVD
In this indie drama, aging filmmaker Mateo Blanco -- aka screenwriter Harry Caine -- tells his assistant about life before the accident that left him blind, when he became embroiled in a torrid and complicated affair with an aspiring actress.

Parents need to know that this drama -- like Spanish director Pedro Almodovar's other movies -- is a complex, engrossing story with themes that are too mature for even most older teens, including infidelity and spousal abuse. Expect frank sexual discussion and some steamy scenes (lots of moaning and groaning, as well as a close-up view of naked breasts), domestic violence (a man pushes his wife down the stairs), swearing, and drug use.

A man and a woman heave and moan on a sofa; nothing is seen, but it's clear they're having sex. Before the act, they engage in sexual banter, and, soon after, he fondles her breasts, which are seen close up. Another couple engages in a steamy embrace; they're under the sheets, but their backs, shoulders, and legs are exposed. A woman talks about hating having sex with her husband, whom she pretends to like but despises. Frank talk about sex acts. A man talks crassly about his ex-wives with his current male lover.

A husband pushes his wife down the stairs, which breaks her legs. He also threatens her when she verbalizes her desire to leave him. A man shoves around another man who's been following him with a camera. Husband and wife argue loudly.

Everything from "son of a bitch" to "f--k" to "ass" to "for God's sake," though not used constantly. Some derogatory terms are also said.

Although the drama here is heavy and complex and characters often behave questionably, the ultimate take away is that true love knows no bounds and, while often hard to attain, is worth the cost. The movie also sends that message that love manifests itself in many ways, not just through passion.

Nightclub DJs talk freely about drug use and offer each other MDMA, meth, and other substances. Characters snort cocaine. One collapses after having a drink spiked with roofies.