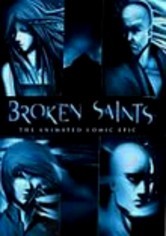 2001 NR 4 discs
Blending anime-style graphics, comic-book text and music, this visually ambitious fantasy-horror series follows a group of strangers on a mission to understand their fates -- and the fate of the world as they know it. After receiving identically eerie visions of an apocalyptic future, four disparate people meet in a distant city in the West, where an orphan girl's shadowy secret holds the key to a massive conspiracy.