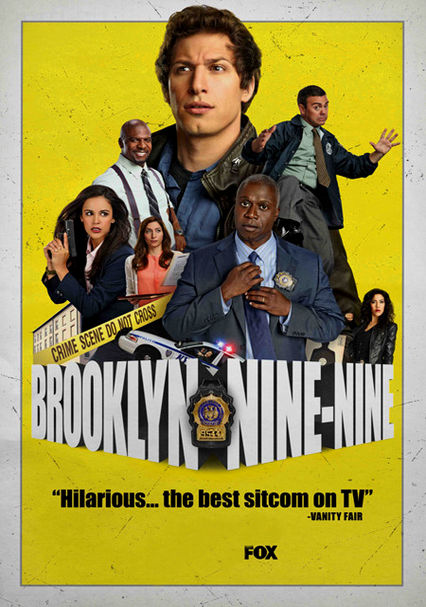 2013 TV-14 5 seasons
This ensemble comedy tracks the characters and cases of a Brooklyn police station, far from the dangerous and dramatic challenges of Manhattan. At its core is Jake Peralta, a laid-back veteran cop who fails to get along with the station's new chief.

Jake's bullheaded investigative tactics continue to create friction with witnesses, lawyers and suspects -- not to mention his boss. Meanwhile, Jake has to decide how to handle the changes in his relationship with Amy.

Detective Jake Peralta (Andy Samberg) and the Nine-Nine are taking #SquadGoals to a whole new level! With a precinct wedding, the annual Halloween heist, and the Pontiac Bandit's most hilarious appearance yet-- this season has even Jake going "full Santiago" (binder and all).

Brooklyn's finest are back and leveling up! From Jake's new prison friendship with a cannibal, to totally #awk office yoga sessions, and the most unforgettable Halloween heist of all time -- there's no place like the Nine-Nine.

Parents need to know that Brooklyn Nine-Nine mixes slapstick crime fighting with some positive messages when it comes to men and women working together as part of a team. There are also a number of positive role models across a range of genders, races, and sexualities. Language is mostly limited to gateway terms like "hell" and "ass," and there's some sexual humor and interoffice romance. And while officers do carry weapons on the job, violence (and any substance use) is typically played for laughs.

Light sexual humor (including an ongoing gag about the captain's sexuality) and interoffice dating.

Characters use and fire weapons, but the overall tone is light; some physical comedy.

There's an attempt to stress the value of teamwork and respect for authority, even though the main character doesn't always comply. Gender isn't a roadblock to achievement on the force.

Social drinking and drug use is played for humor.