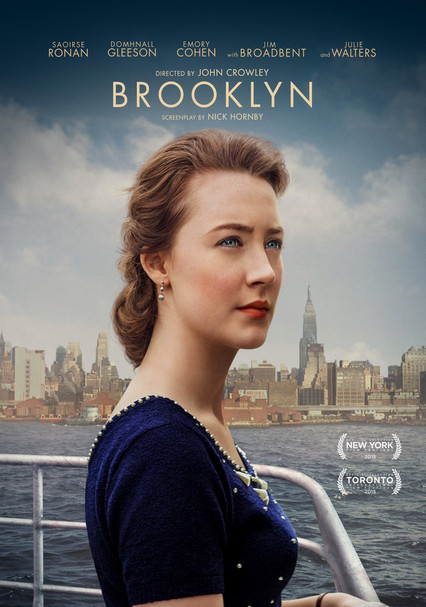 2015 PG-13 1h 51m Blu-ray / DVD
After emigrating from Ireland, Eilis Lacey readily adapts to the vastly different New York City, where she falls for a young Italian. But when tragedy pulls her back to her hometown, she finds her loyalties divided between two nations -- and two men.

Parents need to know that Brooklyn is a poignant period drama about Eilis Lacey (Saoirse Ronan), a young woman who immigrates to New York from Ireland in the early 1950s. An adaptation of Col Toibin's 2009 novel, the movie features infrequent strong language (a couple uses of "f--k," as well as "s--t" and "bitch") and quite a bit of romance, including several kisses and a quick first-time sex scene between a committed young couple (nothing graphic, but it includes some moaning and movements). There's one disturbing moment when a dead body is shown; afterward, a family grieves. Another scene depicts the unpleasant effects of seasickness in a vivid manner. This is an ideal film for teens and parents to see together and to discuss the historical and relevant current themes about family, immigration, independence, and what makes a place feel like home.

Flirting, dancing, a few kisses, and one sex scene that's mostly clothed and quick (though very meaningful for both participants); in addition to kissing and shedding of some clothing, there's moaning and movement. A character skirts the line of cheating but never completely crosses it.

Disturbing scene of a woman's dead body being discovered by her mother.

Promotes the idea of the United States as a land of opportunity and promise -- and that people in the United States have confidence and optimism. Enforces the idea that while your birthplace will always have a pull on you, the place where you make meaningful connections, fall in love, and put down roots is where you'll eventually feel most at home. Encourages young people to work hard to fulfill their dreams.