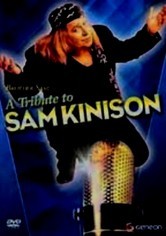 1987 NR 1h 30m DVD
Rodney Dangerfield dishes out the respect he never seems to get in this tribute to late comedian Sam Kinison, who was known for his trademark shouting and politically incorrect humor. With dozens of clips from Kinison's most memorable stand-up performances -- as well as comments from Sam's brother Bill -- this hilarious program serves as a fitting retrospective for fans of the comic's work and as a primer for those new to his humor.