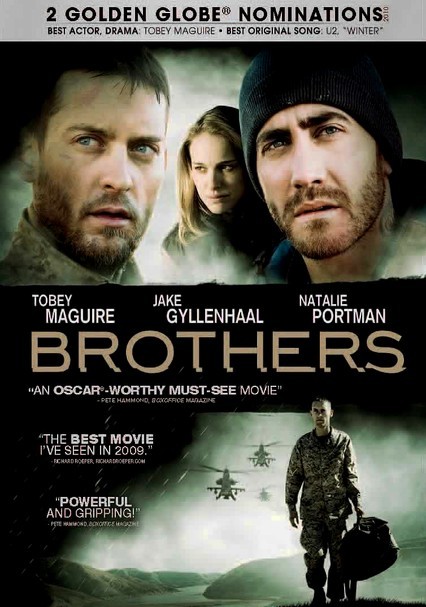 2009 R 1h 45m Blu-ray / DVD
When traumatized Capt. Sam Cahill returns home from a military mission in Afghanistan after he is presumed dead, he becomes obsessed with the idea that his brother and his wife have developed a physical relationship.

Parents need to know that this mature drama (which stars Natalie Portman, Tobey Maguire, and Jake Gyllenhaal) about how the horrors of war affect both a soldier and his grieving family has several disturbing scenes of war, torture, and even domestic disputes -- making it far too intense for tweens and even younger teens. The war sequences involve atrocities, near-suicide, and two startling killings that are chillingly realistic; strong language includes frequent use of words like "f--k," "s--t," "a--hole," and the like. Sexuality isn't too graphic, but there are a few passionate kisses and one shot of an obviously undressed, quilt-covered couple in bed.

A married couple kisses passionately and is shown in bed after having had sex. They exchange a few more kisses and embraces. A widow kisses her brother-in-law once. A man discusses whether his brother "f--ked" his wife, and a young girl lies that her mother and uncle "have sex all the time."

Quite a bit of violence, especially in the war scenes thattake place in Afghanistan. A helicopter crashes; two American soldiersare taken hostage, held starving and captive, andthen tortured. A man is shot in the head; a man is forced to killanother man or be killed himself; many men are shot at and killed, etc. In a moment of fury, a character destroys his kitchen and scares hisfamily. A man points a gun at himself and looks like he's about tocommit suicide.

Despite the devastating effects that war has on Sam and his family, his family remains supportive and loving. The movie explores how war and violence change soldiers and their ability to return to their lives as fathers and husbands.

Tommy gets drunk on a several occasions, and his father is shown drinking liquor a few times. Tommy smokes cigarettes; in one scene, he and Grace share a joint.