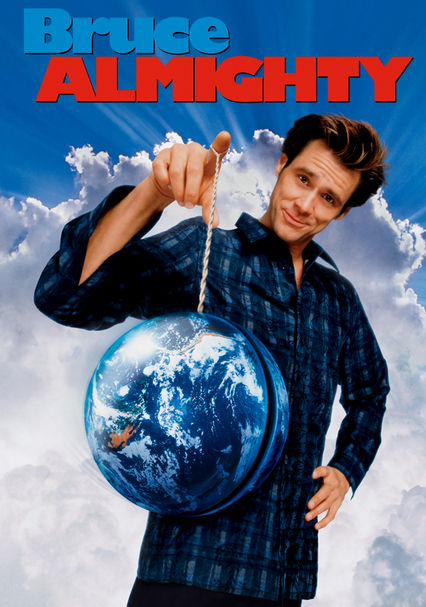 2003 PG-13 1h 42m Blu-ray / DVD
At the end of the worst day in his life, television reporter Bruce Nolan angrily ridicules God -- and the Almighty responds by endowing Bruce with all of His divine powers. The question is, can Bruce improve on perfection?

Parents need to know that Bruce Almighty is a 2003 Jim Carrey movie concerned with fate, prayer, and spirituality. In spite of these loftier themes, it's still a Jim Carrey comedy, with hammy physical humor, profanity, and sexual humor and content. For example, given God-like power, Carrey's Bruce immediately uses the power to make a woman's dress rise up on the street, then has a monkey come out of the rear end of one of the thugs who had previously beaten him up. A recurring joke in the movie concerns Bruce's dog and his inability to be properly house-trained; as "God," Bruce has his dog use the toilet. All in all, Carrey's humor is a bizarre, incongruous pairing with deeper themes of spirituality.

With supernatural powers, a man raises a woman's dress on the street, exposing her panties. During foreplay, this same man uses these powers to work up his girlfriend into a highly aroused state. Later, he points at his girlfriend's breasts and says that they've gotten bigger. References to breasts being "perky," jokes about Playboy and Penthouse Forum magazine.

A character gets beat up by thugs after trying to defend a homeless man. A character is hit by a semi-truck. While not paying attention while driving, a character drives into a streetlight and wrecks his car.

Bruce learns to not blame fate or God for everything that goes wrong with his life and his career, and that his actions, no matter how well-intended, have consequences. The positive messages are undermined by a turnaround that doesn't feel entirely sincere.

Characters drink wine at dinner, but do not act intoxicated.