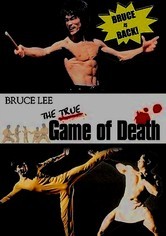 1981 NR 1h 27m DVD
Legendary martial artist Bruce Lee appears in some intriguing snippets from his groundbreaking film Return of the Dragon in this movie that was cobbled together but nonetheless packs a heavy wallop. Before his untimely death, Lee was the virtual granddaddy of all martial artists who followed him. See here why Lee (who also won widespread fame as Cato in television's "The Green Hornet") remains an enduring legacy.