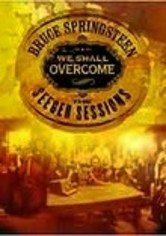 2006 NR 0h 44m DVD
New Jersey's favorite son, Bruce Springsteen, and a passel of his best instrumentalist pals pay tribute to Pete Seeger, the legendary folk music icon (and unabashed political activist). Includes behind-the-scenes footage from the making of the album, plus concert film featuring the Boss on tour with the Seeger Sessions Band as they perform "American Land," "Bring 'em Home" and "Pay Me My Money Down."