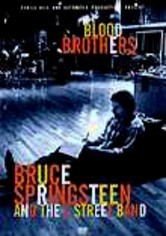 1995 NR 1h 30m DVD
In 1995, cameras followed Bruce Springsteen into the studio as he reunited with his E Street Band to record new tracks for his "Greatest Hits" album, yielding this behind-the-scenes glimpse into the magic between the Boss and his band. This documentary includes interviews, plenty of off-the-cuff moments and performances of new songs such as "Blood Brothers," "Secret Garden," the Woody Guthrie homage "This Hard Land" and more.