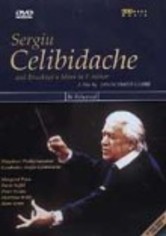 1990 NR 1h 0m DVD
Sergiu Celibidache, known for his mastery of works by Anton Bruckner, conducts the Munich Philharmonic in this performance of the composer's Mass No. 3 in F Minor. The 1994 concert is paired with rehearsal footage and an interview with the conductor. Celibidache discusses Bruckner, the Mass and his orchestral philosophy. Soloists include soprano Margaret Price, alto Doris Soffel, tenor Peter Straka and basses Mathias Hölle and Hans Sotin.