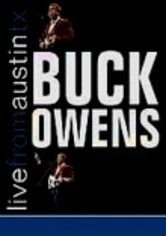 1988 NR 0h 34m DVD
Country music legend Buck Owens wows a sold-out crowd with this masterful performance of the rockabilly, honky-tonk sound he helped pioneer in the 1960s. With a long string of consecutive No. 1 hits, Owens reached far beyond the limits of country music, earning a wide audience of devoted fans. Songs in this memorable set include "Act Naturally," "Together Again," "Love's Gonna Live Here," "Cryin' Time," "Tiger by the Tail" and "Johnny B. Goode."