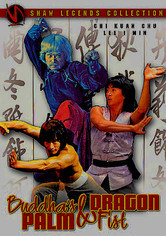 1982 NR 1h 30m DVD
Hong Kong action star Chi Kuan Chun kicks plenty of bad booty in this vintage Shaw brothers martial arts movie. The Shaw brothers (whose heyday was from the late 1950s through the '70s) have influenced the work of action stars such as as John Woo and directors such as Quentin Tarantino. Directors who worked under the Shaw brothers' auspices have been credited with bringing a whole new panache to the "Hong Kong school of martial arts" genre.