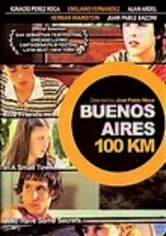 2004 NR 1h 33m DVD
In a small Argentinean town 100 kilometers from Buenos Aires, five friends stand on the brink of adolescence. A summer that might have been filled with bike rides and soccer is instead spent fighting with parents and discovering girls. And this summer may also spell the final season for their friendship. Juan Ignacio Perez Roca, Emiliano Fernández, Alan Ardel, Hernan Wainstein and Juan Pablo Bazzini star in Pablo José Meza's award-winning drama.