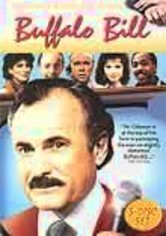 1983 NR 3 discs
Dabney Coleman stars as Bill Bittinger, egotistical host of a Buffalo, N.Y., talk show in this 1980s comedy series. Bitter on the air and off, Bill resents his job and vents his insecurities on unfortunate talk-show guests, station manager Karl (Max Wright) and other colleagues. But unflappable co-host Jo-Jo (Joanna Cassidy) always remains as cool as a cucumber, and Bill always gets what's coming to him. Geena Davis and Charles Robinson co-star.