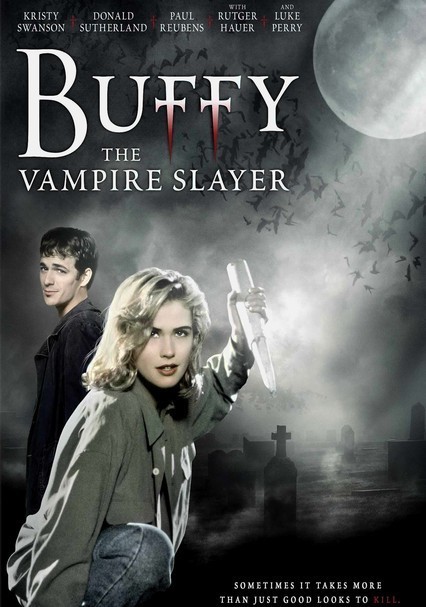 Parents need to know that this forerunner of the classic Buffy the Vampire Slayer TV series has a much different, less serious flavor (and a different cast) than the program. There is mild swearing and verbal sexual innuendo. Though violence is frequent, it's also cartoon-like and almost entirely bloodless, even when people are killed and vampires are being speared or, in one case, deprived of an arm. Except for supernatural mentors (master vampires and vampire-hunters) adults appear either idiotic or inconsequential, and a man in his 50s is considered disgustingly old.

Push-up bras and corsets, some skimpy clothing. Male students say they would enjoy sex with the heroine, without going into much detail (except for praising Buffy's "yobbles," apparently a euphemism for breasts).

Many, many vampires get skewered on stakes, but blood (ironically) is rare, even when one of the undead has his arm torn off. Martial arts-style kicking and punching, reckless motorcycling and driving stunts. One vampire singed with a flame-thrower-like burst of ignited hairspray.

Prominent use of "bitch," "ass," and the s-word uttered once.

The title character has become something of an icon of teenage female empowerment, even though she's kind of an airhead here (though she matures over the story). Except for supernatural mentor-figures, parents, elders, and teachers are barely visible buffoons.

Buffy's superior "fashion sense" is a strong component of the plot, and there's a natural tie-in to the TV series and comics spin-offs.

Mainly one gag monologue in which a pompous school administrator, suspecting Buffy of abusing drugs, speaks fondly of his 1960s narcotics experimentation and LSD trips.