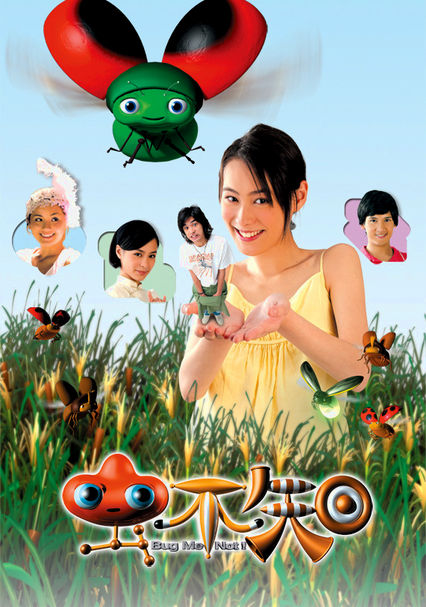 2004 NR 1h 27m DVD
Moon (Isabella Leung), a girl with a serious fascination with bugs, has the hots for a cute boy named Hyland (Wilson Chen). So when a talking ladybug convinces Moon that she should confess her feelings, she does so with reckless abandon -- which has the opposite effect on the extremely shy Hyland. What's a girl to do? The all-star ensemble cast includes pop star Candy Lo, who plays a woman with a hard-core mah-jongg addiction.

Parents need to know that Bug Me Not! is an offbeat blend of music, animation, high school romance, and super powers, in Chinese with English subtitles. The movie may appeal to pre-teens and teens who like their movies quirky and colorful, but don't care much about plot or logic. A few scenes refer to female breasts (or the lack thereof), and there's some coarse language ("horny," "perverts," "flatty") and insults ("dumb," "weirdo"). Mild action includes a few competitive, but comic martial arts moves, a cherished bug in peril, and a short, non-lethal attack on teens by animated insects. Expect some gross-out humor: one boy's super power is offset by his growing very long nose hairs and another pays for his super power by erupting in large puss-filled pimples.

A brief teen girl discussion of breast size. Boy smears wet paint on the chest of the heroine; he's aghast and apologetic afterward. Two quick flashes find a teen couple in a suggestive embrace. Teen boys attempt to spy on girls from a bathroom stall - there's nothing for them to see.

Some exaggerated martial arts moves result in competitors being thrown to the ground, but not hurt. Film shows some skateboard falls, a telekinetic knockdown, an attack of animated bugs. Coochie, an animated bug hero, is mistakenly thought to be smashed by a human and killed; later he is in danger of drowning in a jar of honey.

Some straightforward messages are rather clumsily inserted into this odd mix of characters and plot lines: Have faith and confidence in yourself. If you love someone, confess it. The most powerful energies are love and courage. When the food chain is broken, the environment and its creatures will suffer.